The Cravin' Cajun concept  at The Novotel hotel on Sheikh Zayed Road was introduced to me by some media colleagues, who keep their ear to the ground about all the happenings in the region.  Long story short, they only highlight the best of the best, and persisted until I made my way over to this unique concept in Dubai. I am so glad they did because as far as REAL soul food goes in the UAE, it's virtually non existent, until the introduction of this funky new joint. With a head chef recruited straight from the bayou, this was a promising culinary adventure deep into the southern wild. 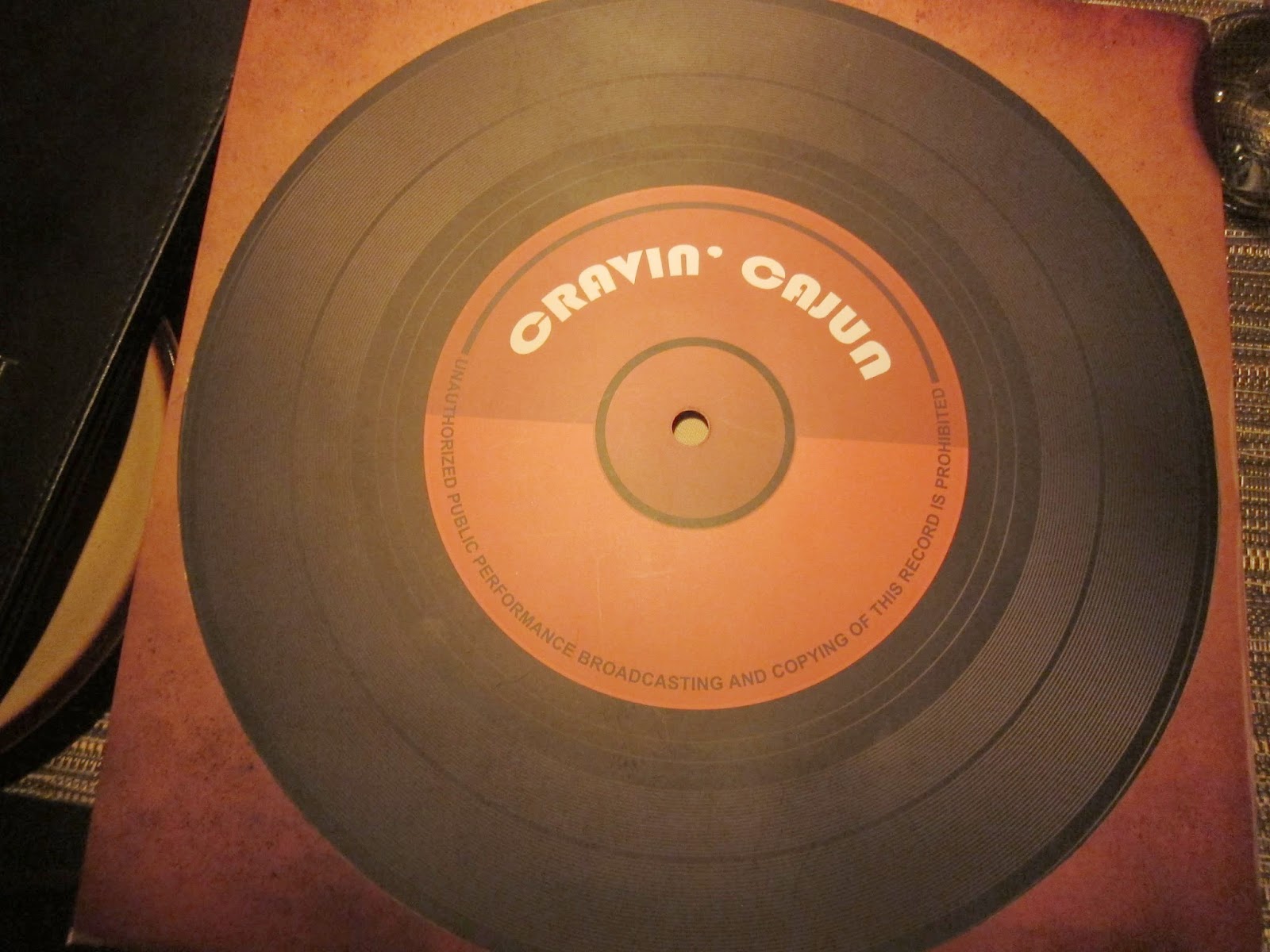 The menu was chock full of southern classiscs, creole, and cajun style dishes. The first on the list of "Must Haves" according to Chef Jeff, a Louisiana native, was the gumbo. Scented with the signature ground sassafras leaves, also known as gumbo file powder, this strong flavored soup with home-made Andouille chicken sausage and okra has a nice kick. The medley of southern flavors really stood out as we dissected this soup bite after delectable bite. Chef Jeff Whitfield had executed one of the most delicious gumbos I have ever tasted outside of New Orleans. 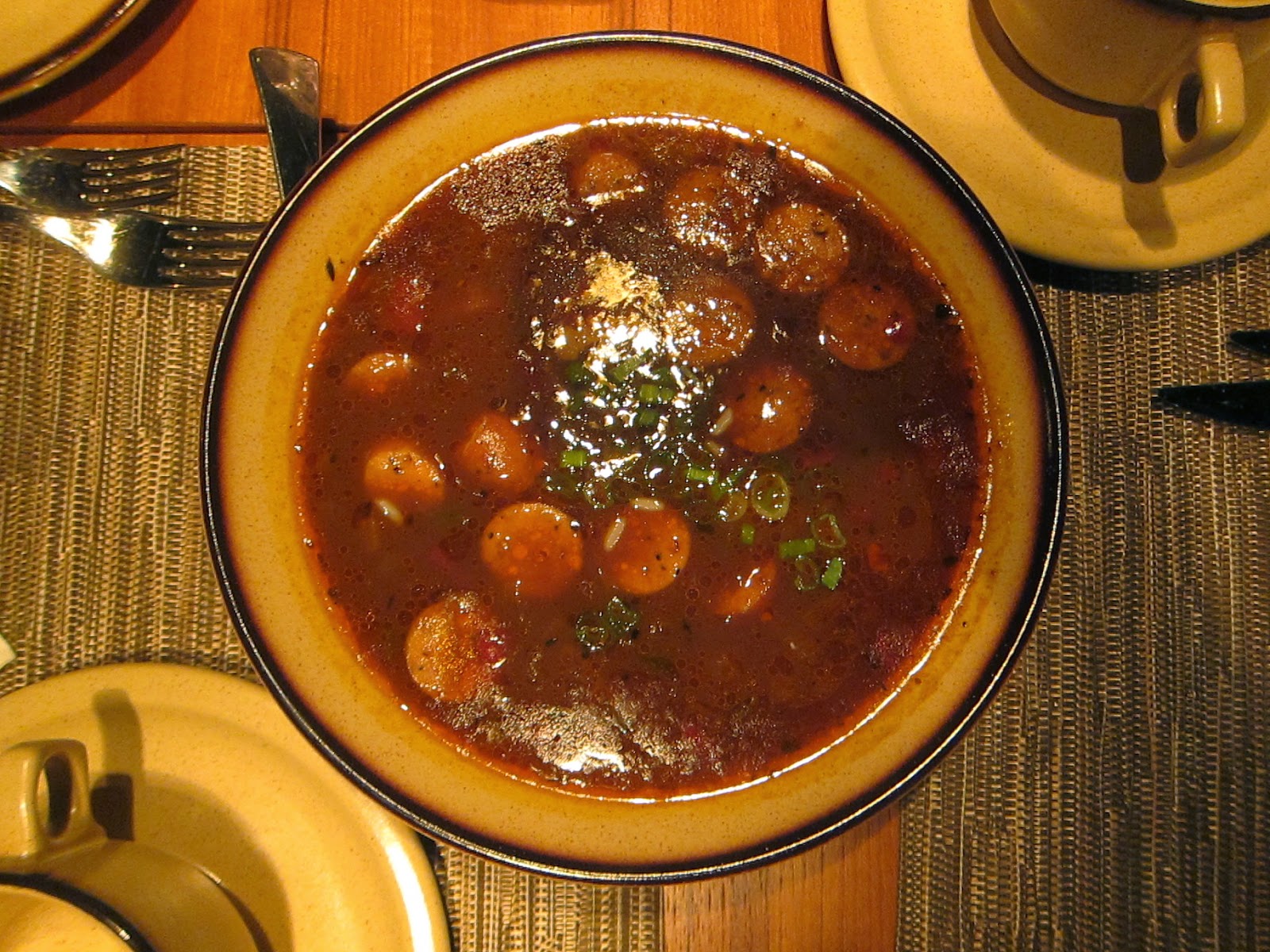 Another pleasant surprise from the appetizer menu was the baked brie en croute smothered in a honey maple pecan sauce.  Anything described as en croute means has to be ordered as far as I'm concerned, how could one resist anything wrapped up in a pastry dough and baked in an oven? The combination of the sweet sauce and savory cheese was perfectly balanced along with the buttery pastry dough which brought everything together beautifully. This treat along with many other of Chef Jeff's creations accurately represents Cajun cuisine, a touch of French-Canadian influence melding with the best of the Southern region. 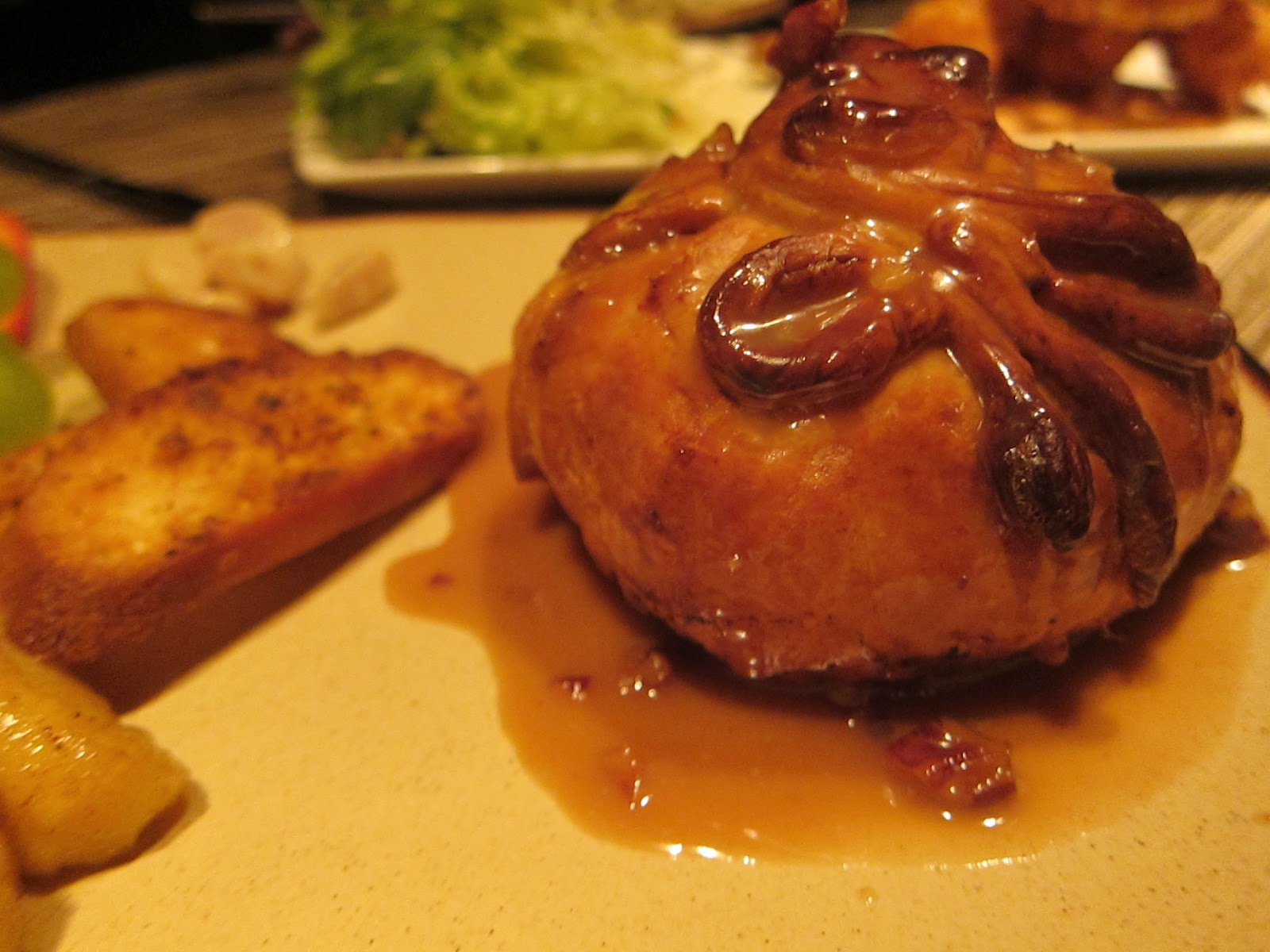 All of the items at Carvin' Cajun are created with a signature New Orleans touch, I recommend going with a group of at least four in order to try a little bit of everything . The entrees feature everything from blackened catfish to a jambalaya, however the hands down favorite was the southern classic chicken and waffles.  It could be that this item is novel outside the Southern US, but the combination of Fried chicken, cornbread waffles, sauteed cabbage, and  potato puree, smothered in a turkey gravy and drizzled with a chili-spiced maple syrup knocked it out of the park. By no means was this a dish to calorie count, in fact after sharing it among our party, we considered ordering another round because it was so addictingly good.  However the waitstaff were savvy enough to remind us about the desserts, so we decided to hold off and save the little space we had left. 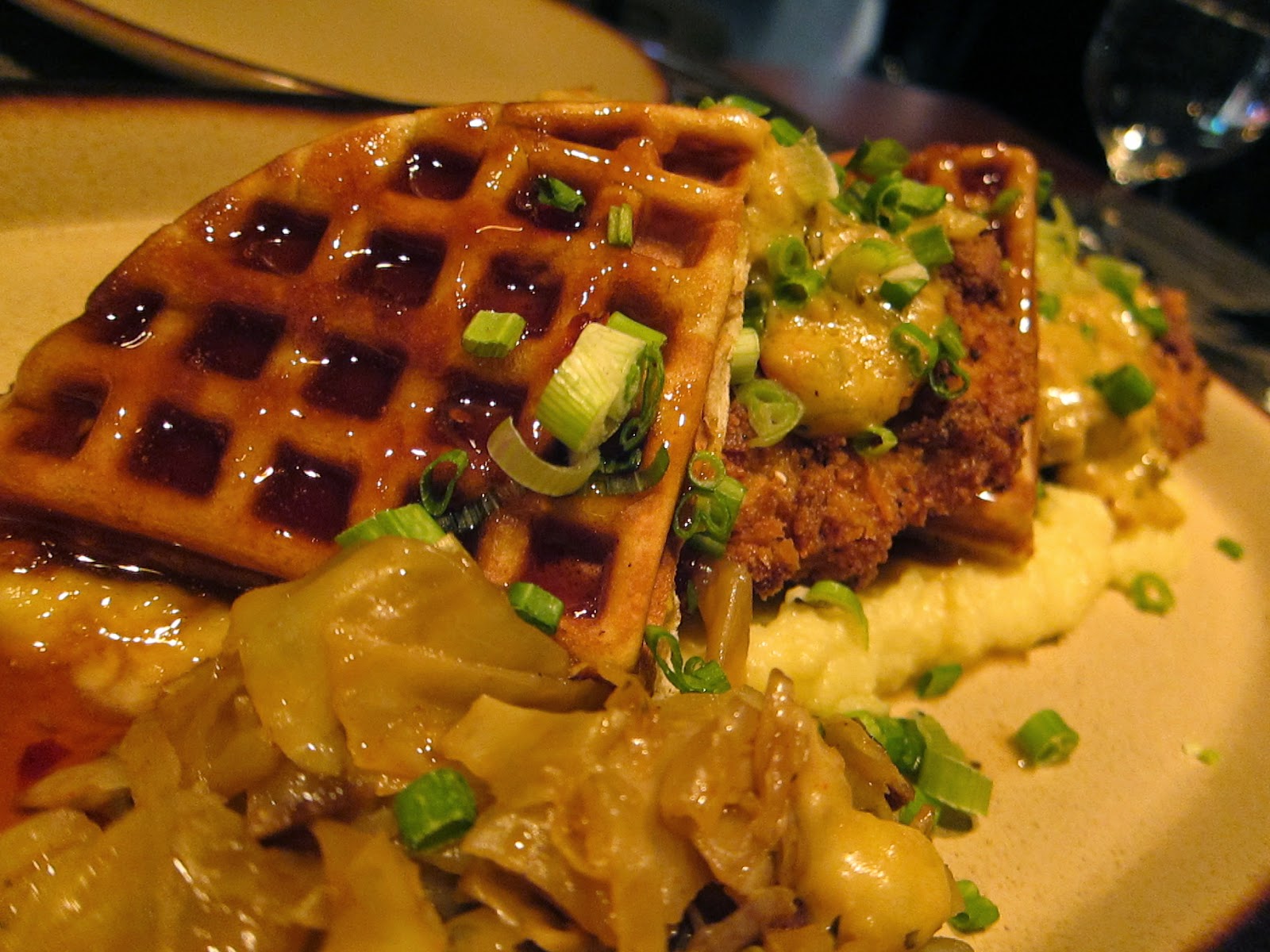 Everything on the sweeter side of the menu was enticing my curiosities.  It had been a  while since I had seen peanut butter pies anywhere in the UAE.  In addition to this Southern favorite was a classic Pecan Pie, Nola's signature Beignets, and the ever so popular Bananas Foster French Toast.  Needless to say our task was a difficult one here, which one to order? So we did ourselves a favor and tried them all!  Everything we tasted was good, but the highlight of the evening was the nutty chocolate treat, peanut butter pie. I am generally a fan of this combination of flavors, but because of the density of the ingredients used, it can often go very wrong.  Cravin' Cajun's version of this dessert was light and tasty, the exact formula to make you want to go back for more. 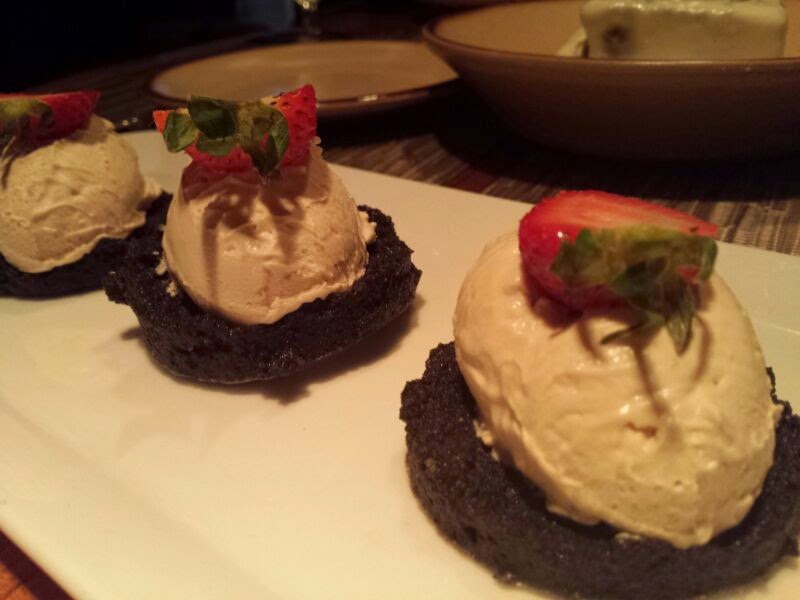 Not only was the food absolutely fantastic, the ambiance was uber cool with smooth jazzy tunes from the live band which made the evening with friends a memorable one.  The Cravin' Cajun experience is not for the faint hearted, but one I encourage those with an appetite for rich Southern soul food to try.  It is an affordable food memory that will stay with you for years to come. Make sure you wear your elastic waist pants and be prepared to indulge in a calorie fest like no other. Cravin' Cajun is open Mon-Sat for dinner from 7:00 pm-11:30 pm. For more information, click on the link below.

Chicken and Waffles are a classic, what's your favorite Southern Dish? 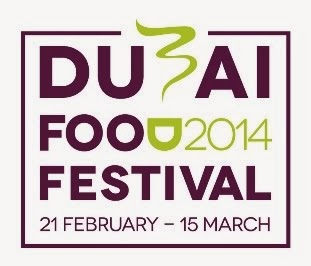